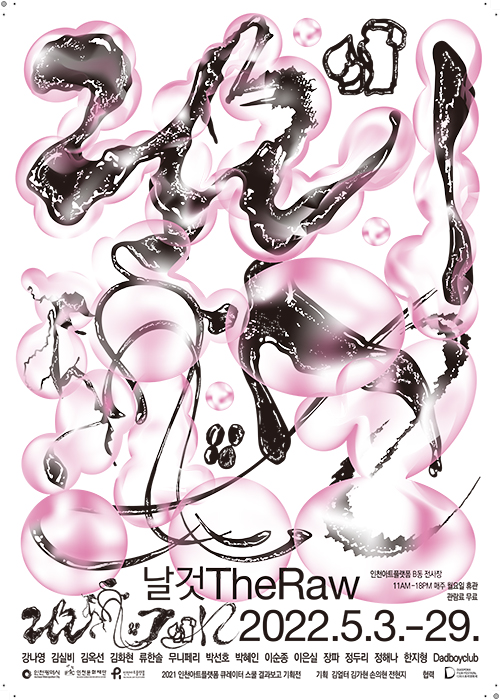 Four curators from the education program for curators programmed by Incheon Art Platform present The Raw. The exhibition is an attempt to subtly reconstruct the geography built by systems/standards that are connected to love, such as dating, marriage, and sexuality. It is a gathering of the artworks that make the audience face the contradiction and ambivalence inherent in various forms of love, which have been treated as abnormal. The exhibition runs from May 3rd to May 29th in Gallery 1 (B), Incheon Art Platform exhibition hall, with the participation of 15 artists/teams.

The exhibition consisted of two parts along the double-story structure of the exhibition hall, Gallery 1 (B). Part 1, “Sadness, Another Name for Love” focuses on norms related to love and the ambivalent, fragmentary, and temporary identity of the subject experiencing it. The acupuncture of oriental medicine is a medium for Lee Soonjong's artwork in the center of the first floor of the exhibition hall. It has the polarities of pain and healing in itself. Kim Oksun, Park Seonho, and Lee Eunsil's work sheds light on the internal contradictions of the subjects standing within the patriarchal gender order. Jung Haena draws the culture only for women at the one side of the cisgender heterosexual norms and seeks compatible pleasure. This ambivalence and contradiction are also found in the process of social manifestation and recognition of a single identity. The work of Mooni Perry and Jang Pa deals with these problems, on the identities which is fragmentary and temporary. These will never converge into one.

The second part “Pleasure of Love” inherits the problem consciousness of the first part. But at this time, contradictory, ambivalence, fragmentary and temporary identities without any consistency are not for critique and removal, but for advocacy. The painting of Han Jihyoung which equates changes in the body with changes in gaze, changes in representation methods, and changes in image, takes over the theme of Part 1 on representation. Park Hyein's work imagines other ways to reproduce without passing through the body and tries to break the link between the biological body and identity. Kim Sylbee's work, which examines the principle of circulation of the birth and death of the universe, widens the distance from all these worries and deals with love in a broad context. In the previous works, the overlap between reality and imagination is shaped into fists that seem to be fighting and cheering each other in Kang Nayoung's installation work. The work of Dadboyclub, Kim Hwahyun, and Jeong Doori tracks the reality of our desires and makes the audience face it. Their work avoids the solidity of the existing identity model: one identity in one body. Ryu Hansol's work shows a woman accepting physical pain with pleasure to marry herself. It is in charge of the finale of the exhibition.